Maratona dles Dolomites – Magic in the Mountains of Italy

Passion, mountain passes, hairpins, heat, mind-blowing scenery, crowds and style. The Italians certainly know how to put on the grandest of Gran Fondos.

Nine thousand cyclists make for a very busy start area and the buzz in the starting pens was electric as the announcer counted down and helicopters circled overhead. 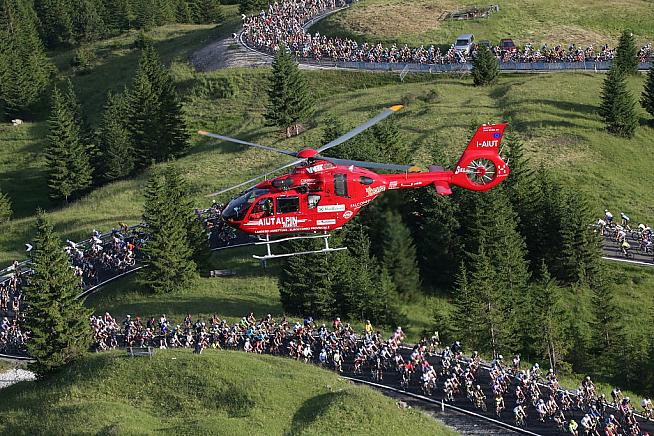 Six hours later, the excitement of the event had been replaced by a grim grind to the top of the Passo Giau.

On its own, the Passo Giau is not the longest or steepest climb in the world. Coming as the sixth of seven climbs on the Maratona route, after 87 kms / 54 miles and in 30-degree heat its 9.9kms / 6.2 miles at an average of 9.3% were taking their toll.

Towards the top, people were stopped on every hairpin, sat in whatever shade they could find or head lowered onto handlebars. A couple of streams alongside the road had crowds around them and bottles were dumped over heads.

If you had overcooked it in the first half of the race you were paying the price.

There were claims that this was the hottest ever running of the event and I can believe it. In 1987 snow on the Gaiu forced the race to be abandoned. 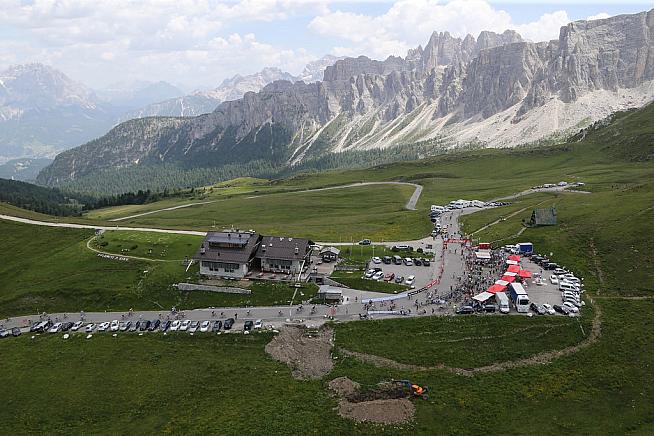 The top of the Passo Giau the toughest climb of the day. Credit: Maratona dles Dolomites
Very glad of the 34x32 gearing on my Lynskey R255, I focussed on keeping the pedals turning and spinning up the 29 turns. Within the last half mile I spotted my trip companion, who had started in the pen ahead of me, and I reached the summit 50 yards behind him.

My day was going well, but Joe a far better cyclist than me and is built for the mountains.

Sure enough, he was suffering. An upset stomach and no sleep the night before the race had taken their toll and he was in a world of hurt - his normal bounciness completely absent.

We rode part of the final Passo Valparola  (11.8 kms / 7.5 miles at an average of 6.7%) together and he graciously encouraged me to press on when he had to take a break.

At the Marmotte in 2014 he finished three hours before me and then looked after me when I struggled over the line so it was nice to be able to return the favor a little at the end of the Maratona.

It really hit home how deep he had dug when sitting in drained silence amid the crowds in Corvara he turned down my offer of a beer.

The profile of the long course. No flat sections at all.
The Dolomites sit in the top righthand corner of Italy, above Venice and just below the Austrian border. It is the same mountain range as the Alps, but they geology has produced distinctive mountains, quite different to the classic Alpine peaks to the West. With its mix of Italian and German the Sudtirol region is equally unique.

The first edition of the Maratona dles Dolomites was in 1987 with 166 riders marking the 10th anniversary of the Alta Badia-Raiffeisen Cycling Club. By 2004 the field was capped at 9,000 with a lottery to allocate places. Tens of thousands apply for a number each year.

It is a true race at the front, which came down to a sprint this year.

Over the 138 km / 85 mile Maratona course, Luigi Salimbeni won in 4:44.43.8 less than half a second ahead of Roberto Cunico with Enrico Zen third, five seconds back.

In the women's race, Chiara Ciuffini came home a much more comfortable five minutes ahead of Manueal Sonzogni in 5:24:47.0. Barbara Lancioni was third. The names reflect that, unlike similar events such as the Marmotte and L'Etape, the field is dominated by the host country.

Full and searchable results can be found here.

A total of 125 Americans took part. Barbara Howe of Boulder was the 22nd woman home on the long route in 6:39.49.6 and Santa Monica's Rudolph Napolitano finished in the same position in the men's event in 5:02.41.1.

A nice feature of the race numbers was that they carried everyone's name in large print along with the rider's flag. It created connections as overtaking riders called out to people by name or asked where they were from.

I had to chuckle when I saw Danish rider Knut Faust. He was fauster than me!

Three courses are offered, all starting from La Villa, down the valley from the HQ village of Corvara. Corvara is also the site of the finish. 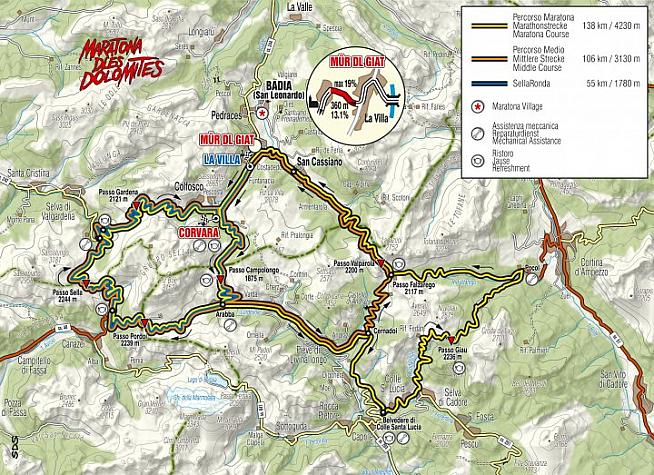 The loops of the three courses of the Maratona dles Dolomites.
The Sellaronda is the shortest at 55kms / 34 miles with four passes to scale and 1,780 metres / 5,839 feet of climbing in a clockwise circuit of the towering Gruppo Sella crags.

All riders cover this ground with those choosing to go longer on the 106 km / 65-mile Medio and Maratona routes carrying on as the Sellaronda riders cross the finish line in Corvara.

The longer routes then tackle the first climb of the day, the Campagnolo (5.8kms / 3 miles at 6.1%), for a second time before heading East at Arabba for a counterclockwise loop to the finish.

At Cernadoi the Medio cuts the corner by turning North to the Passo Valparola where it rejoins the Maratona course just before the top of the climb. The shortcut saves 32 kms / 19 miles, but more significantly bypasses the Passo Giau. The Maratona has 4,320m / 14,173 feet of climbing, the Medio 3,130m / 10,270 feet.

Once reunited, the Medio and Maratona routes are downhill for around 12 kms / 7.5 miles before an uphill run to the finish including the Mur dl Giat. Mur means wall. 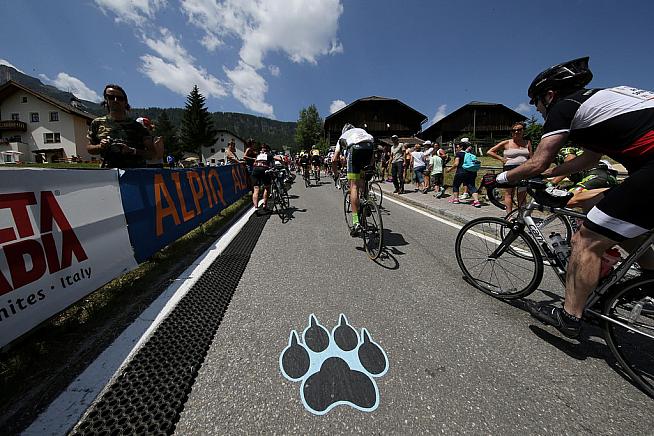 The 19% of the Mur de Giat takes its toll. Credit: Maratona dles Dolomites
The Mur de Giat first appeared in 2014 and looks as though it has become a permanent feature. Unlike last year, the climb was timed and rankings published. Coming just 5 km / 3 miles from the end, it was a nasty twist in the tail and getting up it drove my heart rate to its highest for the day. Most people were walking it when I came through.  Having ridden up all seven climbs without stopping I did what it took to get over the Mur on the bike.

Training had gone well over the winter and I had over a thousand miles of base miles in the legs. The transition to higher intensity work had not gone quite to plan, but I was far fitter than I had ever been before and had Gran Fondo New York and the Highlands Gran Fondo in the bag in May and June as well as the new Lynskey that I took to Europe with me.

Overall, my ride went pretty much as well as I could have hoped. I held it steady throughout, kept a lid on my heart rate to prevent overcooking it too early and managed to do all the climbs without stopping. That is in stark contrast to the Marmotte last year where the Galibier and Alpe d'Huez saw me reduced to ever more frequent breaks as I suffered.

Only 200 failed to finish, which reflects the way the course allowed riders to bail out at the end of the short course or onto the Medio course. It also reflects the strict cut-offs that were applied at various points, in particular, I would hazard a guess, the one that prevented slower riders attempting the Giau.

Two Brits I had met before the event had fallen victim of the clock and had been forced onto the Medio route.

Throughout, the race organisation was superb. From the goodie bag on registration, which contained among other things a jersey and a gilet, through the route profile on the top of the number attached to your handlebars and the mechanic stations out on the course to the efficiency of the finish line - the event was top quality.

The only criticisms I have are the food at the feed stops, which was below average to my mind (the supply of drink was in contrast very good) and a few unavoidable situations both during and after where sheer weight of numbers meant it was a scrum.

Start the hill training, work on your descending and put the Maratona dles Dolomites on your bucket list.