As once attributed to Hannibal (the Carthaginian general, not that guy who eats people), "Aut inveniam viam aut faciam," or in English: "I will find a way, or make one." This seems to be the general philosophy of adventure riding. Or, a more modern reference: "Where we're going, we won't need roads."

We weren't exactly crossing the Alps with a herd of elephants or time traveling, but our merry band faced quite a bit of climbing and chrono-distortion (such as when it took me 16 minutes to go 1.2 miles, but it felt almost like a Sisyphean eternity). 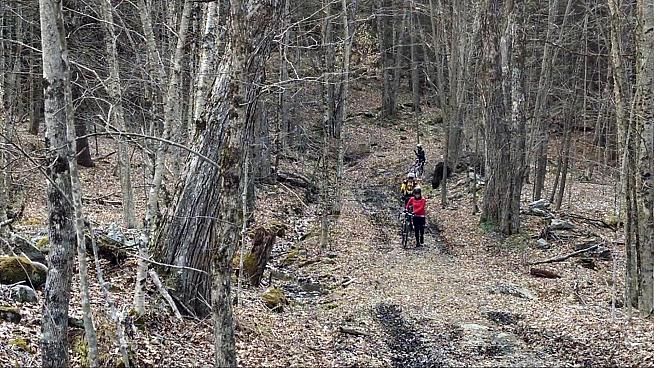 One of the rare occasions when I was in front of Dana and Allison. I actually rode down (part of) that!
After a balmy day riding in the car with Dana Kotler from Ashton-Greycork and Katie MacDonald, resident-Canadian/maple enthusiast from the Harvard cycling team and getting settled in with our other friends Chris McIntosh from Ashton-Greycork/photographer extraordinaire and Stephanie Mayberg from the JLVelo Cycling Team and her fiance Hank Lander, the temperature plummeted as soon as we got out of dinner at the Mojo Cafe Saturday night. Good thing we got those burritos to keep us warm. After an early evening of knitting and partaking in some fine maple bourbon at the condo we rented at Castle Hill, we got some rest.

I don't know about the others though, but I had a bit of difficulty sleeping, perhaps too much giddiness like a kid before Christmas. And like a kid at Christmas, I ran down the stairs in my pajamas to find snow on the trees and houses seen through my window. For breakfast, we made some oatmeal and ate the gingerbread maple waffles I had brought, which had softened to the point where I just referred to them as "plaid pancakes." 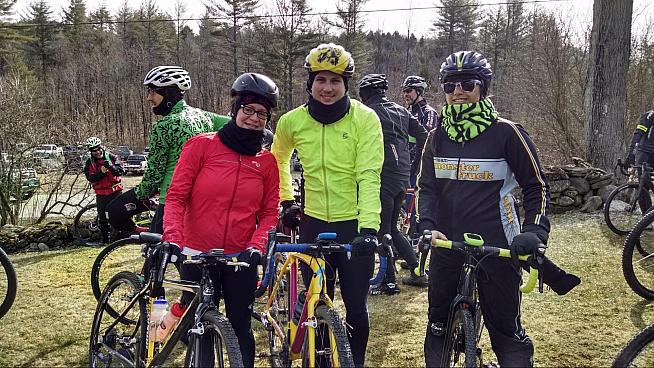 Team MonsterTruck group photo before Grant Halsey disappeared on his 42t x12-27t and I spent the rest of the ride chasing after Allison Halsey.
We quickly packed up and made our way to the start, two cars picking two routes. The car I was in found the route that went along part of the course and experienced quite a bit of bottoming out the car wheels in deep puddles. After check-in, staging amid a diverse group of cyclocross bikes, gravel grinders, mountain bikes and fat bikes (including a fat bike with drop bars!) and an obligatory pre-ride team photo, we were off.

During the "warmup" climb on Whitmore and at the start of the Jenne road climb, I came to the realization that I may have overdressed for the occasion with my two pairs of socks, tights, rain pants long sleeve baselayer, Team MonsterTruck skinsuit, Team MonsterTruck winter jacket, fleece gaiter and wool earcap beneath my helmet. With each grinding turn of the pedals, I felt myself boiling like a lobster. Yet I knew if I faltered, I would have to dismount and walk, like so many others around me had. Aut inveniam viam aut faciam. I will keep climbing on the bike or rip my own legs off to avoid walking. However, this resulted in me losing track of Stephanie, Hank, Chris and Katie. This eventually became "I will catch up/stay with my teammate Allison or rip my legs off doing so," since she had become quite efficient at climbing due to all the singlespeed CX racing she's been doing. It didn't help that she was wearing a red jacket and I've been known to be quite stubborn (or bullheaded as it were). On a side note, Dana had gotten off to walk a couple times and still managed to do the segments faster than me on Strava.

Rural Vermont is as picturesque and magically adventurous as the postcards and tourism bureau would have you believe: mountain views, forests, and streams straight out of an outdoor clothing catalog; farmhouses and barns, so many maple trees with so many buckets and tap lines. What must come up must go down, so after each grinding climb was an exhilarating rollercoaster of dirt and gravel with the occasional pavement. My favorite bit was grinding up some flat slate chips and then more or less surfing down them. Tip: make sure your brakes are in full working order, but obviously don't death grip them if the rollercoaster goes from more exhilarating to feeling more terrifying and out of control. Feather them slightly before going into a corner or a particularly rough patch and especially don't touch them much if you're on anything shifty like sand or gravel. Despite the occasional shuddering of my wheels and knobby tires hitting the occasional bump or small pocket, I threw my hips back and held my top tube between my knees, put my tray table up and enjoyed the flight. 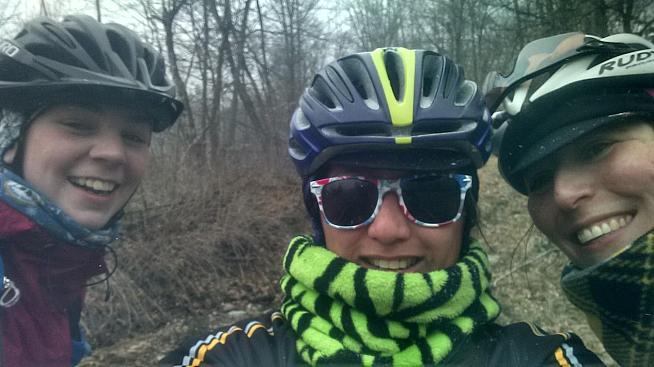 What you don’t see is the rocky muddy creek that we nearly slid down like some sort of terrifying amusement park waterslide.
Allison, Dana and I more or less played a game of cat and mouse, or rabbit chase with Allison being the rabbit through the course. On occasion, we would pass others and they would catch up, particularly the fat bikes rolling down hill. Hearing that thundering behind you on the gravel can be a bit terrifying if you don't know what's behind you. At least the fat bikers were generally friendly and chatty in passing. Some older dude on a mountain bike had made some snarky comment in passing about how we made him feel better since we rode slower. I was tempted to feign concern and ask him if he was aware that this wasn't actually a race and it's generally considered uncouth to elevate yourself at the expense of others. However, I think passing him up the next hill was more than enough of a rebuttal.

I more or less had no cell phone signal and although I had the map loaded on GPS, the path was well-marked by red arrows. Eventually, I was forced to dismount when we reached the second pavé sector. And by pavé, I mean vertical mud punctuated with the occasional moss-covered boulder. To my amazement, one of the VOMAR SAG vehicles, a Range Rover followed us up along with a high schooler shredding her way up on a mountain bike. 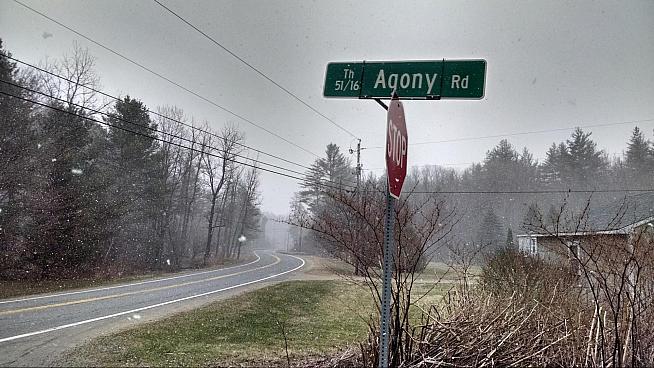 Aptly named road is aptly named.
Remember how I said I had no cell signal? It turned out I had missed a call from Stephanie, who, as it turned out, was on the way to the hospital with her fiance Hank, who experienced a bit of a concussion tumble after hitting a rut. The VOMAR Range Rover SAG had performed a rescue of them and their bikes. By this point, we had gone too far to turn back, so we went to the sugar shack stop and turned back from there. Allison went on to finish the ride, but got to the finish before Dana, the shreddy teenager Carlyle who headed back with us, and me due to the more "adventurous" shortcut we took. Also, remember what I had said about overdressing? You know what they say about New England weather, if you don't like it, wait five minutes. Or, in my case, a couple of hours since it started blowing snow directly into our faces as we were making our way back to the start/finish.

This is where I give the warning that Google Maps is a dirty liar and you should always trust the directions given by locals above that. One route suggested was several miles and about 50 minutes, another way was just a couple of miles and maybe 30 minutes. The "just a couple of miles" turned out to include a dirt road climb (no big deal, we survived a bunch of those today) followed by a descent into what appeared to be a creek. Everyone told us to take the longer paved road that rolled mostly downhill. However, despite having to walk halfway, the "shortcut that was anything but a shortcut" was strangely satisfying to complete.

After a quick bowl of delicious soup from Worthy Kitchen and regrouping with our companions Chris and Katie, we gathered the bikes and vehicles and headed for the hospital to meet up with Stephanie and Hank. As for head-injured Hank, apparently one of the first things he said (after he stopped repeating the question "This may sound silly, but what happened?") was "When's the next ride?" 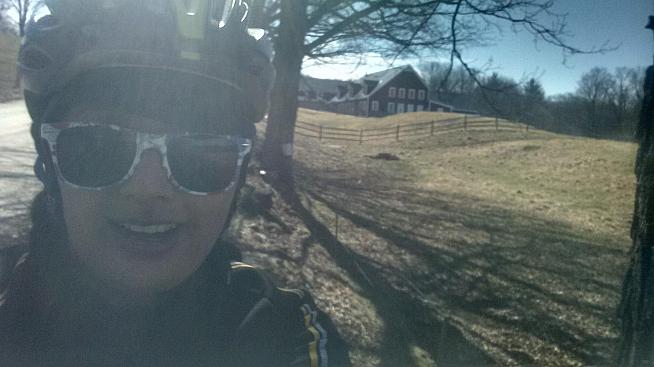 I used this selfie as an excuse to take a break from climbing.
I think that nicely sums up the overall atmosphere we encountered at VOMAR. We looked forward to each challenge up the next hill, down the next descent, around the next corner. Sure, there are always risks, but with great risk comes great reward. I got to witness such things as strangers helping each other with flats, a kind hand on a shoulder to help push someone back uphill. I also got to consume an ungodly amount of maple syrup and you really can't beat that. Vermont, like its chief export is sweet, rich and truly shines in the late winter/early spring.

Special thanks to The GRVL-XX Project for publicizing events like VOMAR and encouraging/sponsoring female riders to attend.