The title's a bit fairy-tale and not as high-falutin' as my previous literary references, but there is something magical about following the little BNB arrows painted on the roads south and west of Boston. For one thing, you never have to worry about not being able to find your way back because the birds ate your breadcrumb trail. 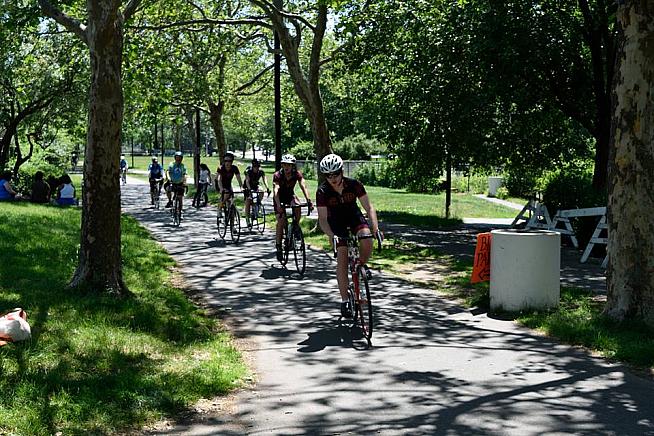 The longest route was 80 miles. Credit: Bikes Not Bombs/James Wang
Let's start at the beginning: Once upon a time, there was a great organization called Bikes Not Bombs that wanted to use the bicycle as an agent of change, both locally and globally. For 29 years, they have fundraised to support their mission through a celebration of bicycles and a day of riding that is fun for the whole family. They keep their minimum manageable enough to encourage more riders and have four routes to suit all skill levels. Sadly, the initial date for this year's bike-a-thon was rained out, but the rain date more than made up for it. 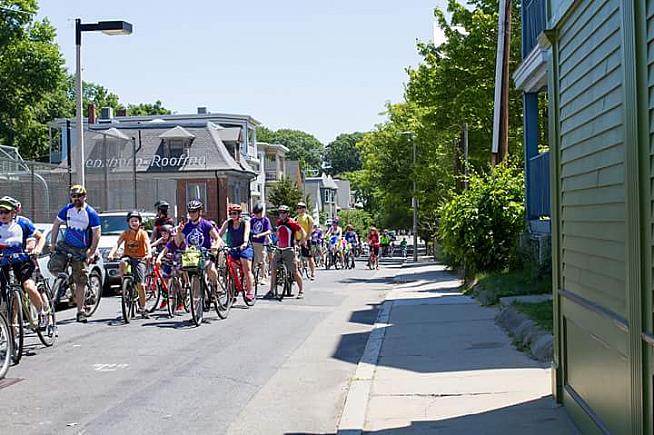 Welcome to JP: starting segment of the Bike-a-thon where it’s more of a parade than ride. Credit: Donrick Pond
This is where I (and my friend Jon Terbush and about 728 other friends) come in.

The 10 mile route is great for families with children, a nice short jaunt, but too short for me to justify asking my friends and coworkers to pony up their burrito money. The 30 mile route is great if you are just starting out or have other plans that day, but it still felt short for my purposes since my weekday rides are about that length. The 50 mile ride turned out to be just right, even though Jon and I had originally planned on taking the 80 mile route as a challenge, because I had been sick that week and had lost the ability to breathe without spontaneously ejecting slimy fluid. 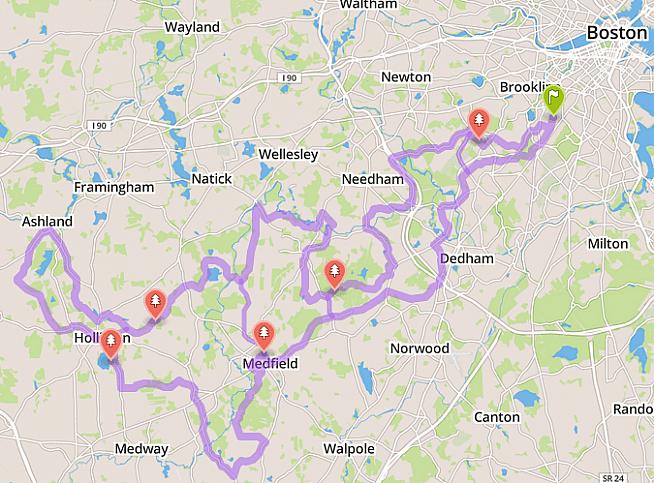 Credit: Bikes Not Bombs
So on a day not to hot and not too cold along a route that was neither too long nor too short, Jon and I embarked after a breakfast of peanut butter sandwiches, fruit and coffee donated by generous sponsors and a photo op taken by photographer/wheelie maestro Donrick Pond.

Like the Midnight Marathon ride, I rode my trusty, if cantankerous road bike (named Malweather) that had recently had a full drivetrain replacement due to the shifting going beyond cantankerous and into completely unreliable territory. Jon had been concerned that he would be unable to keep up with the group on his Space Horse with 40 mm tires (as his road bike with skinny tires had recently been stolen). He obviously had nothing to worry about considering I still had to put in a good effort just to draft him.

Upside of riding with Jon: +5 draft benefit. Downside: being nearly cropped out of photos. Credit: Donrick Pond
On some other day, I might have been able to keep a 17-18 mph pace in a group without going into the red, but this was not that day. We hung with the main, briskly-paced 50 mile group until the first rest stop at the 20 mile mark in Westwood. Another peanut butter sandwich, banana and bottle refill and we were on our way.

For a good part of the route, we leapfrogged back and forth with a couple on a tandem wearing Ragbrai jerseys. I saw a fair share of riders with fancy kit/bikes along with random kids in jorts and T-shirts. The wonderful thing about the bike-a-thon routes were how quiet and devoid of traffic they were (save for a slightly hairy entrance/exit on 109, though that was easily navigated on the shoulder). The road undulates up and down along rolling hills with sweeping curves to spare and rarely a stop sign or light around. Less than half an hour out by car and a reasonable ride on a bike, there are plenty of protected woodland areas to hike through, and importantly provide shade on long summer rides.

At the second rest stop at Powisset Farm, I ran into various friends from cyclocross racing to the Boston Fixed crowd. I enjoyed another peanut butter sandwich, some cheese and a pickle from Grillo's. At this point, it was starting to warm up and there wasn't much shade to be had in the open field other than the rest stop tent. 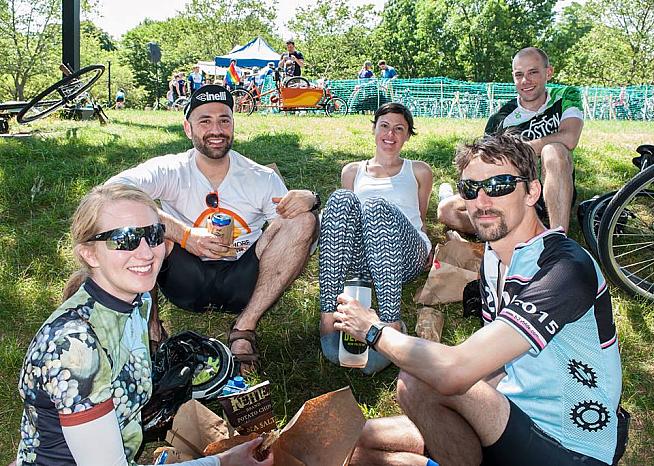 Hillery Metz John Bradford Stephanie Kinkel Aaron Levine and Seth Read relax after the ride. Credit: Bikes Not Bombs/Will Danielas
The last time I did the Bike-a-thon in 2014, I remember it more or less being an arid dust bowl, sneezing my head off with allergies to the point where I actually had to dust my bike afterward due to the yellow pollen that had accumulated on it. That year, I pretty much had to sleep off the 80 mile ride with an ice pack because I had pretty much cooked myself. Thankfully, in 2016, it wasn't nearly that hot..

We rode from city outskirts to quiet suburban neighborhoods to idyllic pastoral roads and back again. I knew we were reaching the end once I saw the families with small children and we slowly, but triumphantly rolled our way back to the start on the Southwest Corridor multi-use path.

At the finishing celebration, Jon and I enjoyed some tacos and other delicious lunch items that weren't peanut butter sandwiches with some of the Flat Top Johnny's team as children played on the downhill slide. There was a face painting station and live music. Once again, the Bikes Not Bombs Bike-a-thon has something for everyone. Full of tacos and good cheer,

I pedaled a brief distance home, showered and took a nap. At the end of the day, the Bike-a-thon raised over $193,000 to go towards the Youth, International and Bike Shop programs at Bikes Not Bombs.

The day after the Bike-a-thon, I saw that a friend of mine had taken the 50 mile route on Strava and commented on the familiarity, to which he replied "I just saw the markings on the road and felt inspired." This past weekend, I took the 30 mile route with a slight detour for ice cream. So, in a way, it's always Bike-a-thon day.