There are gran fondos and then there's Levi's Gran Fondo. The original and quite possibly the best? Well, read on and we'll find out...

Levi's - now in its ninth edition, sits as the pinnacle of gran fondos in North America and it's easy to see why. 5,000 riders, spectacular roads, and scenery, and an amazing level of organization has made Levi's one of the most famous rides in the world. 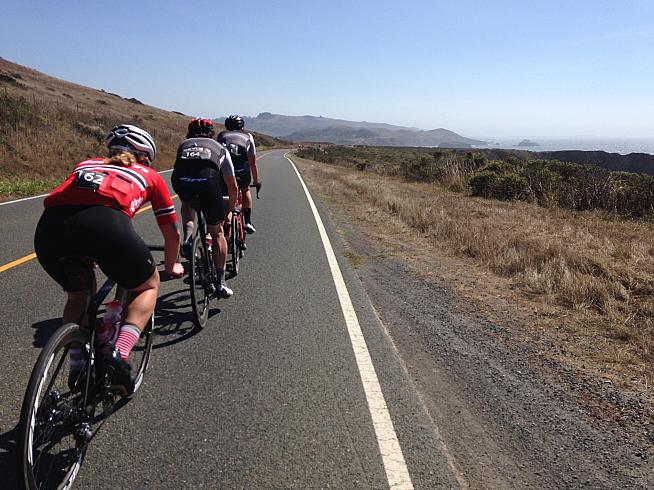 Working together and drinking in the views. Credit: Josh Mott
What is fundamental to why Levi's is so excellent is that the day's enjoyment goes far beyond just the ride itself.

All too often, fondo organizers concentrate on the ride and not all of the accoutrements that go along with making a good ride into a great event. After all, a gran fondo, on the surface, seems like a strange value proposition. Why should I pay $100+ to go and ride public roads that I can ride anytime I want for free?

Levi's, more than any other open-road event I've even undertaken has the answer to this question.

Being a large American event, the startline bravado can come across as a little jarring to a Brit such as myself. The thumping music and pants-on-fire startline announcer cut a sharp contrast against the silence of the foggy early morning. Nevertheless, the throng of over 5,000 riders created an atmosphere reminiscent of the start of a Grand Tour stage start with nervous energy fizzing in the air. 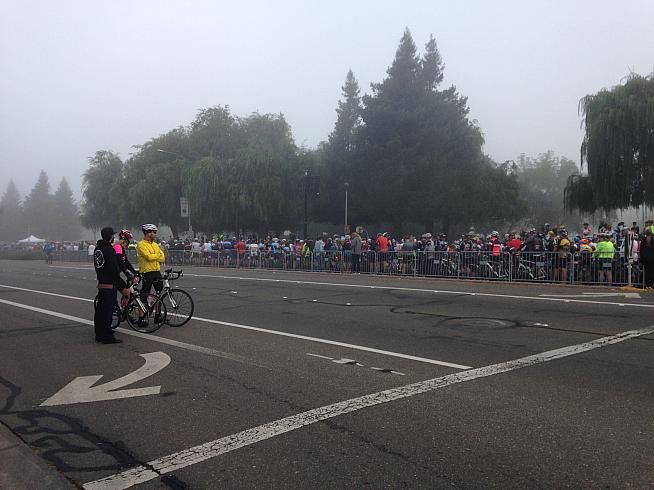 Waiting for the off: Credit: Josh Mott
With the help of the local police, the ride organizers, Bike Monkey, do a great job of orchestrating a mass start that drives home the feeling that you are starting a truly great and important ride in your own cycling calendar.

Levi's offers 11 different route options, ranging from the eight-mile family ride all the way up to the 116-mile 'Il Regno'. I had opted for the Regno, which translates from Italian as the Kingdom. 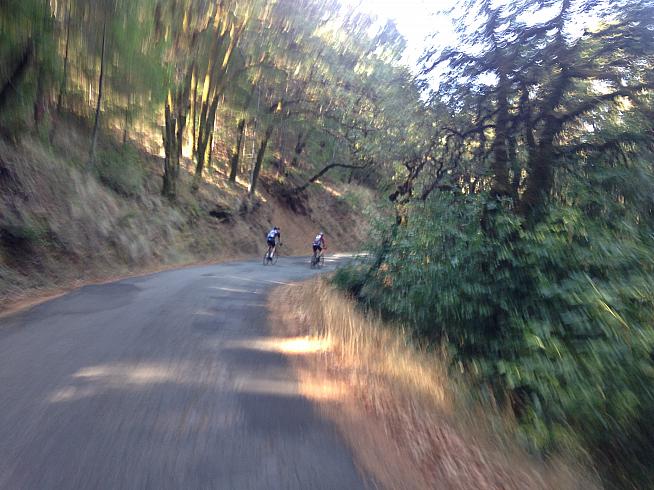 Twisting through the woods. Credit: Josh Mott
The route out of Santa Rosa carved through attractive redwood forest before reaching the first serious climb of the day; King Ridge. This 6.6 mile beauty is one of the most famous in all of Northern California and it certainly helped separate the men from the boys and the women from the girls with several pitches over 15%. The reward for making through the huffing and puffing masses was a stunning view over the hills to the east and the ocean to the west. 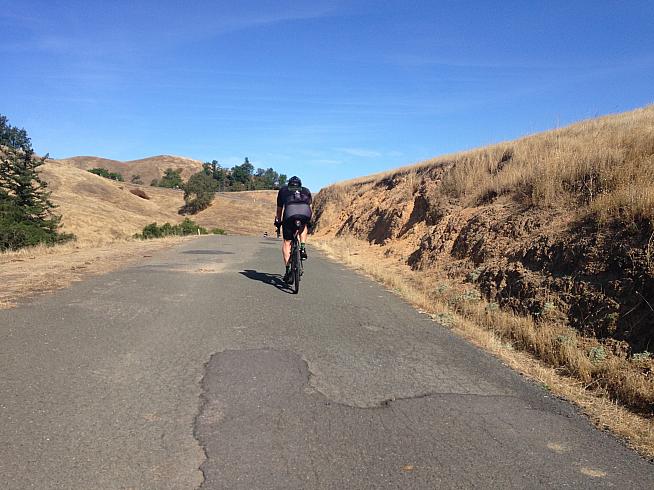 Heading up. Credit: Josh Mott
Riding big climbs at an event like Levi's is always one of the highlights for me personally, especially when you can see the great mass of riders stretched out in front and behind you on the snaking tarmac. You form a giant train of humanity all suffering and all loving every moment of it. 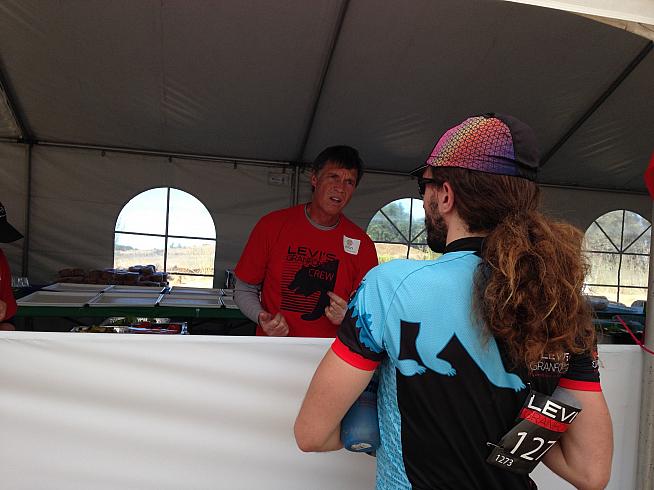 Levi's Crew on hand to assist the riders. Credit: Josh Mott
From the top of King Ridge the route made it's way down to the coast via a fast, aggressively surfaced, and occasionally frightening stretch of road. At its end was a welcome feed station, which provided some of the tastiest grub I've ever been fortunate to enjoy mid-ride. Delightful turkey wraps, iced water, and a wider selection of fruit than deserves to be in a tent was promptly scoffed up before I continued on towards Highway One and the stunning coastal views. 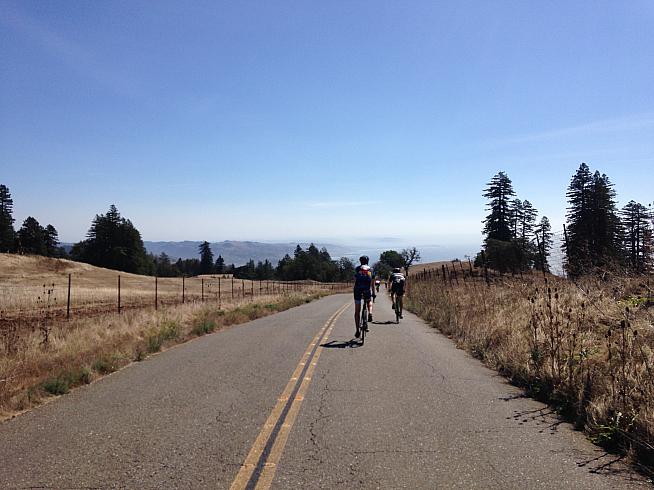 I can see the sea. Credit: Josh Mott
The next section of the ride is what really separates Levi's from the pack. Highway One is spectacular and the views of the rugged California coast provide a spellbinding distraction from the fatigue starting to build in one's legs.

I had opted for the route with some gravel climbing options. One such track was the Willow Creek climb, which didn't amount to much more than a footpath in places. Still, the variety and sense of adventure only enhanced the day's riding. It also meant I missed out on what is reported to be a real brute of a climb in Coleman Ranch, which the 'traditional' Gran route takes you up. Even on this rugged dirt section, support motor bikes and volunteer marshalls provided technical and motivational support where needed.

From the Willow Creek summit, it was a predominantly downhill ride back to Santa Rosa. At the finish line, riders enjoyed a wide array of food, drink, and entertainment as well as a much needed lie down in the grass for some. 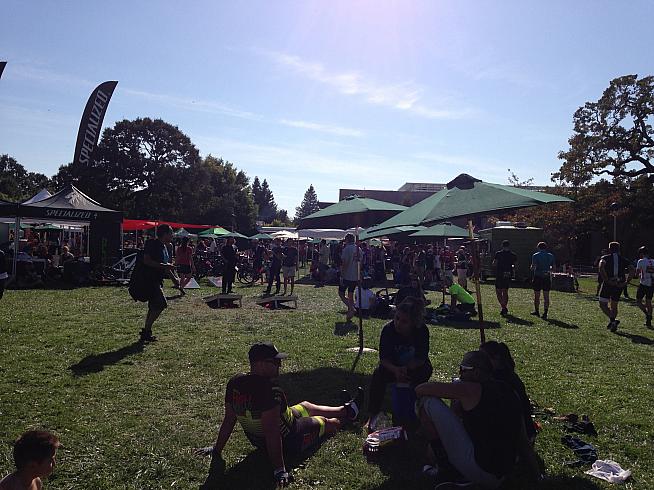 After the ride. Credit: Josh Mott
113 miles later, I can safely add Levi's to my Mt. Rushmore of gran fondos, alongside the Etape de France, Ride London, and Paris-Roubaix Challenge.

This is a professional event through and through yet it manages to keep the spirit and feel of smaller grass-roots sportive. The route is world-class and the friendliness and support of all of the volunteers and staff helps to keep you motivated all the way through. You'll be hard-put to find a more rewarding and enjoyable day on the bike anywhere in the world. Mark your calendars for the 2018 edition.

Registration is open for the 2018 Levi's Gran Fondo with significant changes, including a three-day festival and lower prices, promised.