Improve Your Climbing With No Training

For those of us living in hilly or mountainous regions, climbing is a fact of our cycling lives. Even if your home is surrounded by flat land many of the gran fondos and other events that the typical cycling enthusiast signs up for involve a significant climbing.

So how can you improve your climbing with no training?

There are two main ways to improve climbing - one involves a lot of hard work and discipline and the other comes totally for free! 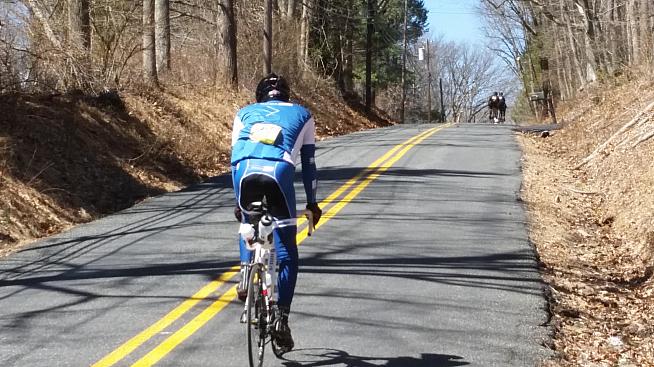 Riders attack a typically steep slope during the 2015 Hell of Hunterdon. Credit: Dan McCausland.
Clearly, increasing your power and/or losing weight will significantly improve your climbing ability. Increasing power is the cornerstone of every training programme we roll out to you. We aim to have you generating your peak season power a few weeks before the target "A priority" events that you have signed up to do. Losing weight is easier than increasing power, but it has a finite payoff - i.e. you lose so much weight that it negatively impacts the production of power.

As a coach I spent a lot of time at this time of year trying to get people to do things that don't sit well with their egos.

Ride slowly, keep aerobic and don't hammer it does not compute to people who want to be 'on form' 12 months of the year. These people tend to either underachieve in their target events or are injured at the end of March. So if you want to drop your buddies at the foot of every climb then stop reading and continue to not fulfil your potential. If on the other hand you want to improve and become a better climber for free read on.......

The Climb for Free System - I first leant this system from my old Coach and mentor Tony Williams at Flamme Rouge - is so logical, but so widely ignored!

First find a local climb that is around six minutes long - a good Strava segment is useful as you will easily be able to see your average speed and time taken.

Now go out and try and ride up the climb as fast as you possibly can. Get back home, upload the ride and check out the power or speed curve of the all-out effort. I reckon it will look something like this: 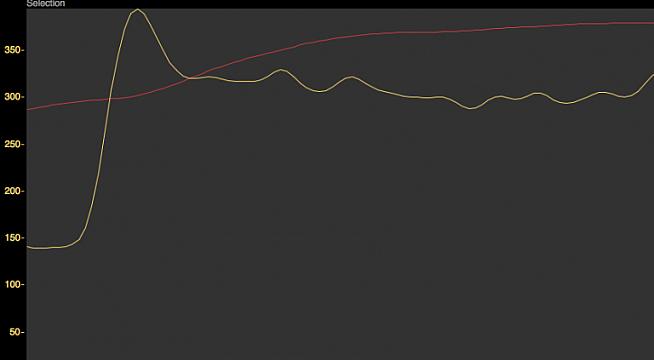 The yellow line is the cyclist's power output or speed and the red line is heart rate. At thestart of the climb the initial enthusiasm sees power increase to about 420w before the inevitable oxygen debt kicks in at around 30 seconds and power falls off a cliff. Lactate is now accumulating at an ever increasing rate and power falls further and heart rate goes up. A brief rally into the finish and the rider is spent - matches burnt and if he or she were to ride the rest of the ride in this fashion it would not end well.

You will most likely feel that you could have ridden it a lot faster - and you can!

Go home, upload the data and look in amazement at how close your time is to your all-out effort. So close for what seems like half the effort. It's a free lunch.

A couple of days later go out and ride the same hill for the third time. Now armed with your new found wisdom you can set a new record for the climb. How?

Ride the first two thirds of the climb at your average power or speed -  in our example this is 315w for four minutes. We know we can do this because we rode the last five minutes of our second attempt at this power. For the last third of the climb increase power or speed to a level that you think you can hold for two minutes - in our example that might be somewhere near 375w, but pace an effort that will get you to the top.

If you have ridden the first four mins at 315w and the last two mins at 375w you will have set a new PB with an average power of 335w, a 6.5% increase in average power. Your power or speed graph should look more like this:

As you get more fit and more confident in this new found approach then start to break the climbs down into thirds or quarters aiming to be building speed or power over each segment, always finishing at your fastest. You won't be dropping your friends at the beginning of any climbs but you will be powering past them very quickly and for far less physiological cost.

The only training we have to do is training is with our minds - it's a mental strategy for improvement. We haven't increased our power massively, we have just maximised what we have already. Good cycling is all about economy of effort - blowing your lid off at the foot of a climb is neither economical or good.

Armed with this new strategy you are now much more more efficient and that means less energy expended and more left in the tank for the rest of your ride. On a long gran fondo or century this could be the difference between a Gold medal or a DNF.

We are not all built like Fausto Coppi who could glide up a mountain in a seemingly effortless dance, but we can all maximise what we have at our disposal. Climbing is not just about power and weight - it's as much to do with the mind and executing a proven strategy.

Rob Wakefield is a fully qualified Level 3 Cycling Coach with the Association of British Cycling Coaches and founder of Propello, a cycling focused health and fitness business delivering Performance Training Programmes and Bespoke Coaching to cyclists anywhere in the world.

All cyclists who are looking to improve their speed, endurance or strength will benefit from a structured training programme. Propello Training will improve how your muscles, lungs and heart work and will enable your body to transport and utilise fuel effectively - making you faster and stronger for longer.