The winner of the 2015 men's race and the third-place finisher on the women's side failed drug tests at the May 17th event.

Oscar Tovar and Yamile Lugo were caught by US Anti Doping Agency (USADA) testing. The failures have only become public now due to both riders challenging the positive samples. This is the second time riders have been caught doping at Gran Fondo New York.

The newly declared winner of the 2015 Campagnolo Gran Fondo New York is Raul Montana from Colombia. The runner-up is Timo Krieger from Germany followed by NYC local Mike Margarite in third. 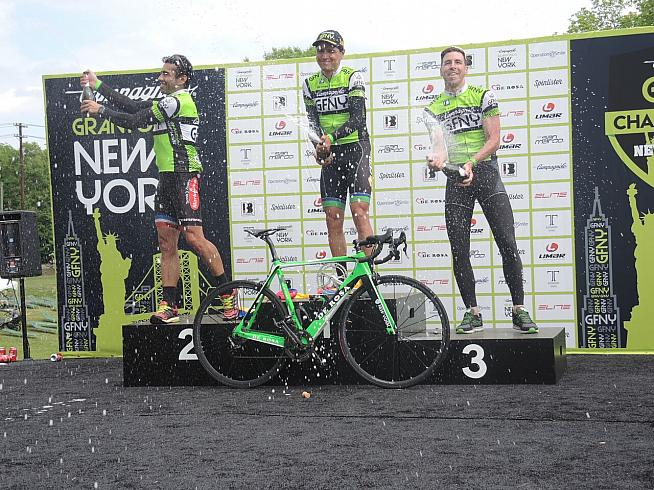 The 2015 GFNY podium with Oscar Tovar centre. Credit: GFNY.
"We are of course upset and hurt that a doper taints the reputation of our race and had us celebrate him on the day", said GFNY CEO Uli Fluhme.

"However, it's without a doubt more important for us to do what we can to make our race fair, of which doping controls are an integral part. Simply looking away and not testing the athletes is the worst decision that a race director can make because it forces everyone to take drugs to try to level the playing field," said Fluhme, who is a very vocal opponent of doping in person and social media.

Rather than trying to hide the doping issue, Fluhme and GFNY issued a full press release announcing the failed tests and broadcast the news on Twitter and Facebook. Having talked the anti-doping talk GFNY can't be accused of not also walking that particular walk.

Gran Fondo New York is the championship event for the GFNY World series of satellite events. These now number eight with the addition of Germany, Indonesia and, most-recently, Mexico City to the schedule for 2016.

Tovar, who won the 2015 GFNY Colombia event, tested positive for synthetic testosterone. He has been banned from any competition under World Anti Doping Agency (WADA) rules for two years and by GFNY for lifetime at any GFNY World event.

Lugo's dope of choice could have been testosterone, like Tover, but it could have also been another anabolic agent such as DHEA.

Both Tovar and Lugo are from Colombia and on Facebook Fluhme asked people not to tar all Colombians with the same brush.

"We'd like to ask you to hold back your judgements on Colombians in general just because of the acts of a few idiots. At GFNY Colombia, Lidia and I (Uli) were received with unparalleled hospitality by kind and wonderful people in a beautiful country. We were amazed by the enthusiasm and knowledge for road cycling, something you would find otherwise maybe in Italy. We encourage you to join us at next year's GFNY Colombia to see for yourself."

"While we cannot turn back time to celebrate the true overall podium winners, we make sure that at least the right winners receive the prizes they were supposed to earn," said Fluhme. "And we continue our efforts to provide our athletes fair racing conditions through in- and out of competition doping controls, despite it being a substantial cost for GFNY. The ultimate goal is not to catch cheaters but to deter them from racing at all." 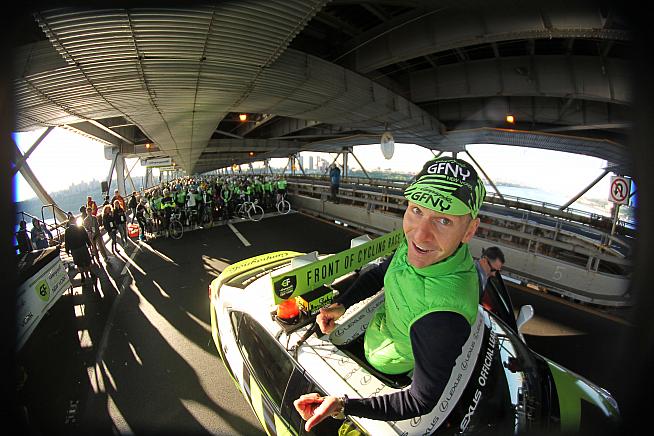 A happier Uli Fluhme at the GFNY start on the George Washington Bridge. Credit: SPORTOGRAF.COM
GFNY established doping controls in 2012 and is the first event open to amateurs that also institutes out of competition tests. In 2012, David Anthony from NYC and Gabriele Guarini from Prato, Italy tested positive for EPO at GFNY after winning their respective age groups. All samples in 2013 and 2014 were negative.

In addition to a lifetime ban for dopers at GFNY races, the race's rules also state that a rider who tests positive at GFNY will have to reimburse the cost of the doping test. Furthermore, such rider has to reimburse GFNY for any damages to its reputation that are a consequence of the positive doping control. If the rider is part of a team participating at GFNY, the team can be held liable for this damage.

A rider who is currently banned by WADA from competition may not participate in any GFNY event. After the ban, he/she is allowed to participate but has to start at the back of the field, will not be timed and will not be in the results. This allows for social reintegration despite a lifelong ban from competing.

The 6th annual Campagnolo Gran Fondo New York on May 15, 2016 will be the second annual GFNY Championship. The race features the world's most international peloton with riders from over 70 countries. Athletes take on a challenging 100-mile route from NYC to Bear Mountain and back to compete against each other, the clock and themselves in a personal endurance challenge.

The 50-mile GFNY BEAR on the same day is a non-competitive ride from NYC to Bear Mountain.