Is The Mavic Haute Route Rockies The Ultimate Bucket Ride?

On June 24, 600 riders will clip in at the Boulder start line of the first Mavic Haute Route Rockies and start pedaling. It is the best they'll feel for at least seven days.

The first ascent arrives after just two miles in the shape of Sunshine Canyon before further climbing to reach the Peak-to-Peak Highway at around 9,000 feet.

Five more mountain days and a hilly time trial follow over the next six days as the peloton covers 507 high altitude miles (815 kms) from Boulder to Colorado Springs. There's also the small matter of 49,000 feet / 15,000 meters of climbing before the finish party in Colorado Springs on the 30th. 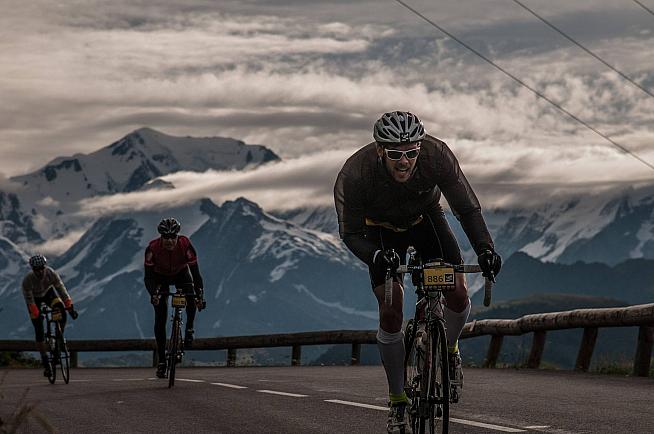 Haute Route Riders surrounded by mountain peaks. Credit: Haute Route
There are 16 big climbs, all but two above an altitude of 8,000 feet / 2,500 meters. Independence Pass, Kebler Pass and Berthoud Pass, are all tackled and 15% of the distance is on dirt roads.

It's a Herculean task — though of course will all that upper body mass old Hercules probably would not have been a great climber, more of a track sprinter perhaps.

In Europe the Haute Route has become something of a gold standard for amateur cyclists. Woe betide the L'Etape or Marmotte rider who humble brags about how exhausted they were at the finish only to have an HR bomb obliterate them — "Well done, yeah, I did the Haute Route Alps last year"— BAM!

John Woodson -- the Bucket Rider -- will be tackling all seven days of the Mavic Haute Route Rockies for granfondo.com with daily reports from Colorado during the event. He will also be detailing his preparation for the Haute Route in the weeks before the start. (Read his first training update here) 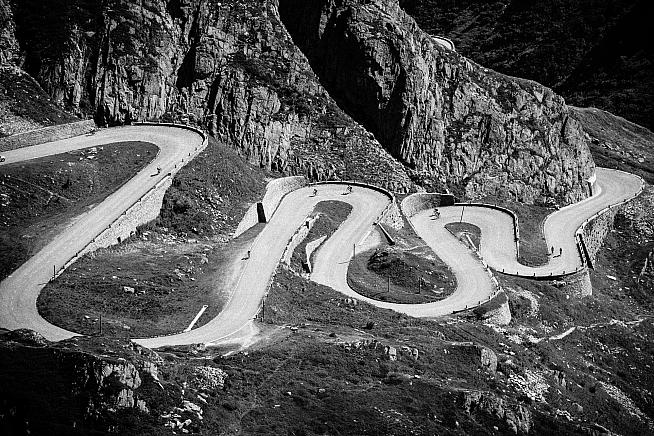 The Haute Route's course designers take their riders over iconic cycling roads. Credit: Haute Route
While the Mavic Haute Route Rockies is brand new there is no shortage of local knowledge behind it. Organizers OC Sport hired Chandler Smith as race director, fresh from a decade running the Denver Post Ride the Rockies event, now in its 32nd year.

"The Rockies are simply stunning and we have chosen some classic climbs that we feel sure will test and enthrall our competitors," said Smith. "The climbs may not all be the consistent 8-10% gradients seen in Europe but they will reward the sort of steady determined riding that has always typified Haute Route competitors." 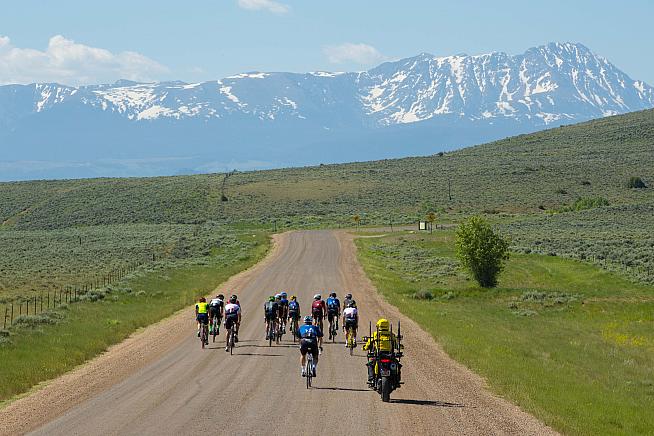 The Haute Route recce ride in an unmistakably American landscape. Credit: Haute Route/OPP Creative
"Highlights during the week will undoubtedly include the highest climb - Independence Pass - while Magnolia Drive, which is the steepest with some ramps at 16%, will also surprise the riders", he added. "On top of this, any section of dirt road will be memorable, especially the jaw-dropping beauty of Trough Road and Sopris Creek Road."

Ride the Rockies is a non-competitive ride (as much as any ride is). In contrast, the Haute Route is explicitly a seven-day race.

There is start-to-finish timing each day. Daily rankings by age group, gender and team are reinforced by an awards ceremony each day. Final positions are calculated on cumulative time over the week — just like the pros. Unlike the pros, riders finishing outside the daily cut-off time continue to ride. They are, however, removed from the official rankings.

For many participants reaching the finish line in Colorado Springs is the sole aim and tales of camaraderie at the back of the field are legion. That said, if its European counterparts are any indication there will be fierce competition at the front. No pressure John!

The Mavic Haute Route Rockies is part of a burst of expansion by organizers OC Sport and for the first time takes the Haute Route outside its European homeland.

The Haute Route event began in the French Alps (2017 will be its seventh year) traversing the mountains from Geneva to Nice. It then grew into an odessey across Europe with seven-day events added in the Pyrenees in 2013 and the Dolomites/Swiss Alps the following year.

And now the Rockies and dirt roads. 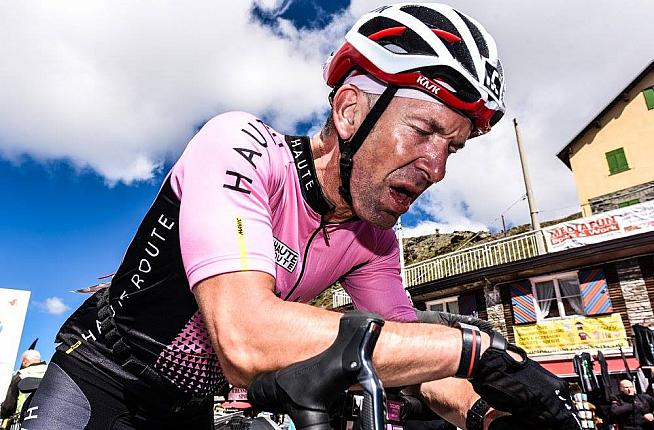 No one said it was going to be easy. Credit: Haute Route
Matt Holden, COO of OC Sport, scouted the route in June 2016 and noticed both the unmetalled roads and the thin air.

"Around 15% of the roads we'll ride on aren't paved, but they are mostly hard-packed dirt rather than the traditional gravel roads seen in Europe. They are safe and manageable and riders don't need a new bike to ride on them. I used a standard road bike with 25mm tyres and felt very safe even descending at 60 or 70kmh," said Holden.

"Regarding altitude, every day in the Rockies is at altitude, but there are ways to acclimatise and manage this," he explained. "We recommend arriving as early as you can before the event, ideally three or four days or more if possible."

Holden has said that in drawing the line between very tough and impossible in designing the route they had erred on the side of caution in comparison to the European events due to the altitude factor.

And you've four days of riding in the legs already. It's all relative.

There has been no watering down of the support offered to racers. The Haute Route boasts that it provides professional-level event organization extending to mechanical support from sponsor Mavic's bright yellow vehicles, medical teams, marshalls at intersection, rolling road security, motorcycle outriders, feed stations and film crews. 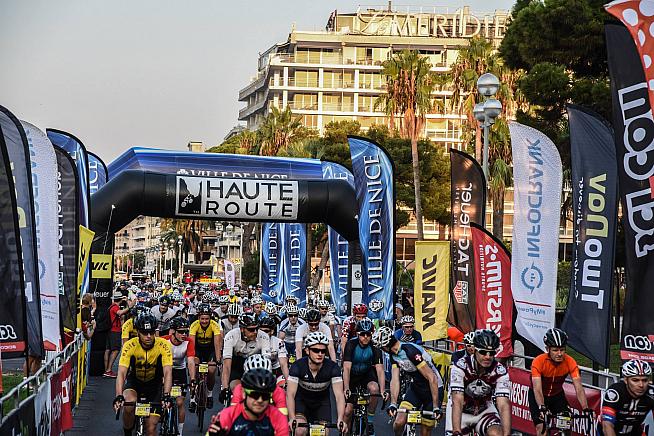 The Haute Route Alps sets off. Credit: Haute Route
Off the bike, there are daily safety briefings, a laundry service, massages, evening meals and a logistical juggernaut that moves the circus to its next stopping point. Riders also receive a full Haute Route cycling kit, travel bag and backpack.

As might be expected, that level of support comes with a price tag. In the case of the Haute Route Rockies it is $2,400 with accommodation on top of that. Many riders choose to buy support packages from specialist tour operators that take care of everything not covered by the event registration itself.

Given that competitors fly in from points distant as well -- there will be a sizable European contingent in the Rockies -- it certainly seems that, while undeniably expensive, the cost represents value for money for many.

A few spaces remained unfilled as of May 8. 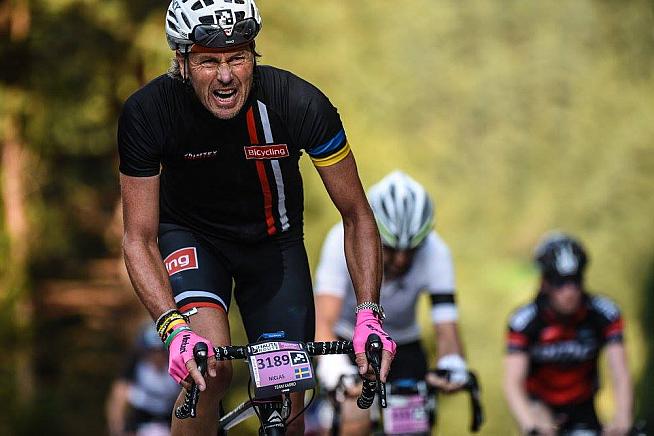 The more you put in the more you get out. Credit: Haute Route
A hard core in Europe don't limit themselves to just one week.

Riders who tackle two of the European events back-to-back are known as Iron Riders while those with the legs for the full Grand-Touresque three weeks in the saddle from Spain to Italy earn the title of Triple Crown Riders (and the utmost respect).

Beyond the week-long marquee events, 2017 sees the introduction of three-day events at Alpe d'Huez (July 12 to 14) and Ventoux (October 6 to 8) based around a fixed base. OC Sports intend for these shorter versions to be more accessible as regards both the physical requirements and the time commitment.

Norway will join the three-day roster in 2018. 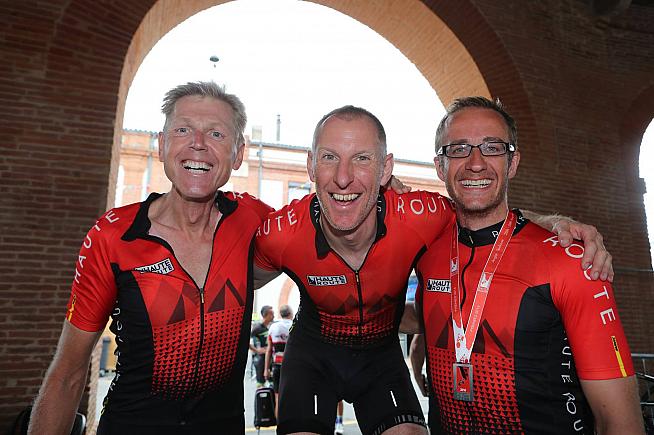 They look like they've had an okay time. Credit: Haute Route