Second Time’s the Charm at The Tour of Battenkill

This was all about slaying a demon.

Last year I rode this iconic New England race for the first time and was found wanting. I under trained and went out too hard. The result was that some twenty miles from the finish I ran out of gas and had to drag my sorry frame over hill and dale to the finish cursing my folly all the way.

This year I vowed everything would be different. I got a training plan and rode intervals all winter in my garage. In the run up to the event I studied the course religiously and memorized all the major features and their position along the route. The day before I pre-rode sections of the route and adjusted my tire set up accordingly (Continental Four Season 23 clinchers).

I wasn't just ready for Battenkill. I was prepared for a cycling apocalypse. That said I had also accepted the idea that I would be dropped by the pack and that this would probably be a good thing. Last year I worked too hard to stay in a fast bunch and paid the price.

So it was. As the Cat 4B 40+ field climbed the first hill on Meeting House Road the elastic snapped. I consciously held a steady pace and resisted the temptation to chase the pack. Instead I would stick to my plan and ride my own race. At the end of Meetinghouse Road I passed another solo rider. Mark was his name. I introduced myself and suggested we work together. He nodded agreement and we began to take turns pulling. 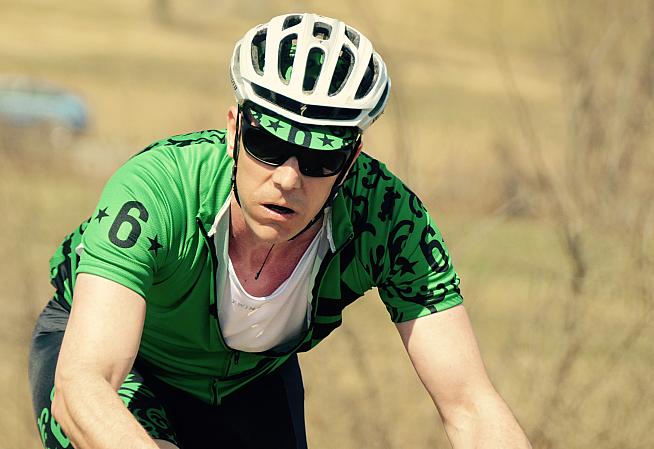 The author on the gravel of the American Queen of the Classics.

Soon after a loud antipodean voice hailed us from behind. A big rider in an Australian national champion's jersey drew along side. The big Aussie had another rider in tow called Dan. The Big Aussie barked at us like a track coach. "30 second turns on the front and don't go into the red," he yelled. Dan just set his face, said nothing and did hard pulls. Mark and I joined in. Are you a real Aussie National Champion? I asked. No. He wasn't.

A few moments later another string announced their arrival. "Work together with us" announced a rider in a pink and black CRCA / Hatchmap jersey. His name was Glenn. He brought a group of about ten riders up to us and we formed a pack. Together the Big Aussie , Glenn and I organized our group into a smooth rotating paceline. As soon as the rider on the inside had pulled through they would swing up and ease back down the line. For the most part it worked beautifully. The efforts were short and the recoveries were long.

At the back a lonely wheel sucker in a US Military Cycling Team kit very artfully shifted from wheel to wheel without ever pushing up the line. "Do a turn," I yelled. He just looked at me and scowled. There was no point wasting energy on him I thought and I moved up the line.

For fifteen miles we worked together like this until at the foot of Juniper Swamp road we were overtaken by the Cat 4 open field and the rhythm was broken. On the other side of the hill the group reformed but sans the Big Aussie. I never saw him again in the race. "Big downhill coming up," shouted a marshal. "Good!" came the reply from the group. But it wasn't good.

The downhill was a long straightaway. Initially it seemed innocuous. We all got into our aero tucks and made the most of the chance to make up some time. At the end of the straightway the road turned sharply to the left and then still descending made a hard right turn. We were all going too fast and it was almost too late.

Glenn, Dan and I sensed the danger before the others and we adjusted our line accordingly. It was enough to see us through safely. But behind they were not so lucky. I heard a yelp and the sound of carbon, flesh and road meeting in an unwelcome union. I didn't look back. What had been a group of eight or nine riders was now three. 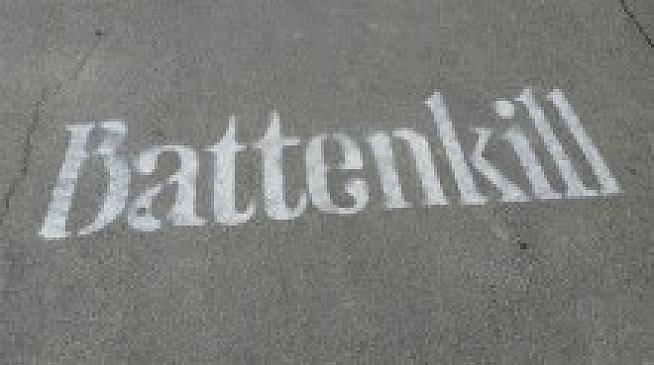 Anthem Sports marked their territory.
Dan seemed to be the strongest and took the longest pulls at the front. Glenn and I were grateful for the respite. We made it through a rolling section of the course to the feed zone and then the big hill at Joe Bean Road. Somehow my climbing legs had recovered a little and I was the first of our little bunch over the hill, I eased up slightly at the top while Glenn and Dan caught back on for the descent.

This repeated itself over the next dirt climb at Riddle Road where we also picked up a few more riders and a new smaller pack formed. The run in to the finishing was mostly downhill but was marred by strong head winds. Three hours in and my muscles were cramping. The slightest extra effort sent them into spasms. If I stopped pedaling they also started to spasm. So I tried to keep my effort steady and smooth and to ignore the searing pain in my legs.

It was my turn to suck wheels and save my energy for the final hill. Again my legs had just enough to get me up and over without dropping too many places before crossing the finish line. My final time was 3hours 34 minutes putting me in 39th place out of 74 finishers. A respectable mid pack position. Crude math tells me my average speed was 19mph.

Dominic Stobart is a member of the Twin Six team and has five bikes in the garage.